This remarkable pianist was the whole evening on stage to our greatest happiness, developing her personal conception of Beethoven's music. We can say for sure, that we did share an event which was altogether refreshing, emotional and brought us to the highest peaks of spirit.

The highlight of the concert was the perfect playing of Diane Andersen, who enthused the public with the Grieg piano concerto.

At the last concert of the Philharmonic (Brussels), Diane Andersen, who has recorded the complete piano work by Gabriel Pierné (EMI) played remarkably his Piano concerto op.12. She brought perfectly out the splendour of the last movement played in the hell of a tempo!! This concerto fits her like a glove.

" Le Soir ", Brussels
Diane Andersen is one of those few artists who makes you feel intensely that, at the very end, the musical language is simple and speaks to you directly, if only the interpreter gets to its essence, bringing only the music.  (Mozart, Brahms)
" Vers L'Avenir ", Belgium
The highlight of the concert was the famous pianist Diane Andersen. She played Beethoven's Piano Concerto nr 3 with extraordinary virtuosity, clarity, dreamy precision and exceptional musicality.
" Grenz Echo ", Germany

For her interpretation of the terribly difficult Sonata (1926) by Bartok is only one qualification: MASTERLY!

The exceptional pianist from Belgium, Diane Andersen, for the second time bewitched Bitola festival audience... The artistic power of the Sonate op.63 by Vincent d'Indy, the tonal structure that requires maximal pianistic stamina, was part of each cell of the "Grand Lady of the Belgian piano art" ... Fascinating was her demonstration of d'Indy's color. Such an artistic performance implies Andersen's immense love for music, her explorations of the broad and rich horisonts music offers, but above all, a spiritual world where the artistic excitation is of highest importance.

Opening with an authoritative performance of Beethoven's Bagatelles op. 126, Andersen demonstrated she really understood the quirky rhythms in the wonderful pieces... Perhaps lacking the sweep of the late sonatas, the music is concentrated and contains many wonderful moments, which this distinguished artist highlighted. The more familiar Schubert Klavierstück nr 2 D946 was also a delight in this pianist's hands. 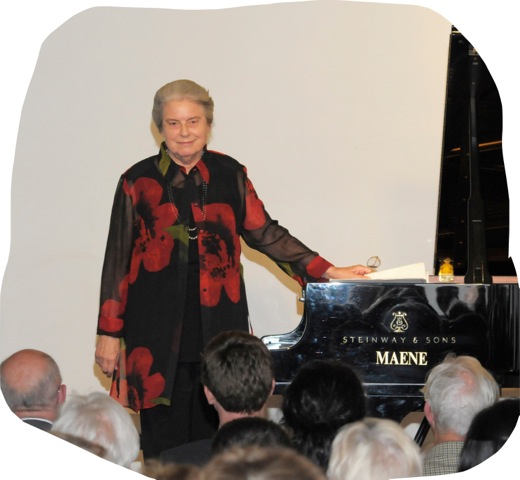